July 21, 2018
One of the main areas of interest for me is the work done by John Laing on the construction of the London-Yorkshire Motorway, more commonly known now as the M1. John Laing was responsible for the first 55 mile section of the motorway from south of Luton to Crick1. The construction of the motorway was described as "the most extended civil operation since the railways" and it may be no coincidence that it may be considered to have changed the way people thought about travel. The social and economic impact might not have reached the levels generated by the steam age but at the time  it was seen as ground-breaking, Howard Watkinson, Minister for Transport and Civil Aviation said that the motorway "would transform ideas of transport" 2. 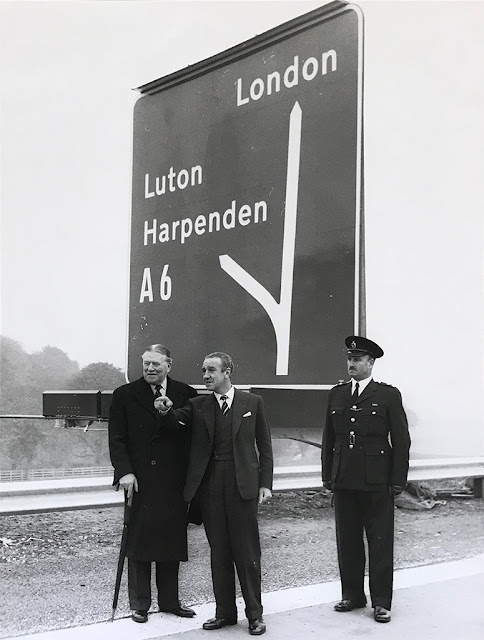 London/Birmingham Motorway. The Minister for Transport with Sir Owen Williams at the official opening of the motorway on November 2nd 1959. © Historic England 2018 - The John Laing Collection #55732


There is a growing literature on the design of transport systems and a socio-geographic perspective, Merriman3 considers "motorways as ribbons of concrete, geometry that is part engineering, part painting, part sculpture but mostly an exercise in choreography of the landscape" while Pevsner4 had to include the M1 in his monumental Buildings of England series, allowing that motorways were modern architecture but maybe not of a type that he could easily accommodate.

The increased speeds achievable and the new road layouts would demand new signage and the police forces had to get to grips with a range of issues.  Some of these were brought about by the novelty of the motorway, essentially a tourist attraction when opened.  Superintendent Pritchard5, writing in 1960, noted that "the first weekend was fine and motorists and motor cyclists came in their thousands to see the new road and try it out. Driving standards were poor ; breakdowns were frequent; the bridges were crammed with spectators and the scene was largely one of careless abandon".

All rather different from most people's experience of the 2018 incarnation of driving on the M1.

March 24, 2019
Yesterday I presented 'The Power and the Glory: A Study of John Laing & Son Ltd through its Photographic Archive" at the Society of Architectural Historians of Great Britain's Architectural History Workshop in London. There was a lot of positive feedback and a number of entirely new areas to take a look at, such as the work done by William Mitchell. Mitchell was  a sculptor from the 1950s who worked extensively in Laing's concrete products - thanks to Dr. Dawn Pereira (see some of Dawn's work on Mitchell here  The concrete legacy of William Mitchell ) for bringing this to my attention.  Mitchell has a number of works listed including pieces in Clifton Cathedral ( Cathedral Church of SS Peter and Paul, Clifton Park ). The series of presentations helped give a real sense of the amazing variety of subjects and approaches that fall loosely under the banner of architectural history and it was noticeable that photography played a part in quite a few.  To show th
Post a Comment
Read more

July 19, 2018
The building of Coventry Cathedral after the previous incarnation was all but destroyed in a German air raid was one of the "power and glory" contracts that John Laing won in 1956 and one that John Laing felt particularly strongly about 1 . The John Laing Collection has a number of albums which depict the development from many angles and includes both construction work and more presentational aspects such as the recording of visiting dignitaries and in particular members of the Royal Family. The images for the latter are often taken from newspapers such as the Coventry Evening Telegraph. One such image from the Leicester Evening Mail shows Sir Basil Spence showing Queen Elizabeth II a model of the new Cathedral in the grounds (it is assumed) of the ruins of the old Cathedral. Basil Spence explaining the site of the new Cathedral to Her Majesty The Queen Photograph by Leicester Evening Mail 23rd March, 1956. © Historic England 2018 - The John Laing Collection The fact
Post a Comment
Read more